The Turkey Pavilion of the 59th Venice Biennale opens like the pages of a book of fairy tales. The fairy tale progresses with minimal figurines made by Onur using threads on platforms, each designed in the form of a cloud.
Curated by Bige Örer, Director of Istanbul Biennale and İKSV Contemporary Art Projects, the exhibition tells the story of a group of mice and cats who unite against the destruction that humans have created on the planet.
Mice and cats are the main characters in Füsun Onur’s work, which she prepared without leaving her home for two years during the pandemic. By bending and shaping metal wires for the Turkish pavilion, the artist has created scenes that feature different characters and various sections of their lives. Each scene depicted on the clouds spread across the exhibition space came together to form a holistic narrative.

In this fairy tale world, the rats, who learn about the man-made pandemic through the newspapers distributed by students after school, begin to discuss what they can do to overcome it and decide to cooperate with the cats to fight against this crisis which threatens the environment. the whole world. Their fight is not only against the pandemic, but also against the global climate crisis…
The main character in Onur’s Tale is a mouse named Cingöz. Cingöz cooperates with both cats and mice. Here, Füsun Onur brings his own cats Zorba and Lolita into the fairy tale.
The story then goes to Cingöz, when he sees a ship crossing the Bosphorus and is saddened saying he could never go to Venice, then at the invitation of his friends.
It’s a fairy tale, fairies, music, love, and then the pandemic is included.
The exhibition, which offers no definitive end to its visitors, allows the viewer to add new meanings to the work through the relationship he establishes with his own world.
The exhibition design, reminiscent of a fairy tale, was done by Yelta Köm, while the lighting design was done under the direction of Erinç Tepetaş.class=”medianet-inline-adv”>

A MINISTER OF CULTURE ATTENDS THE OPENING FOR THE FIRST TIME 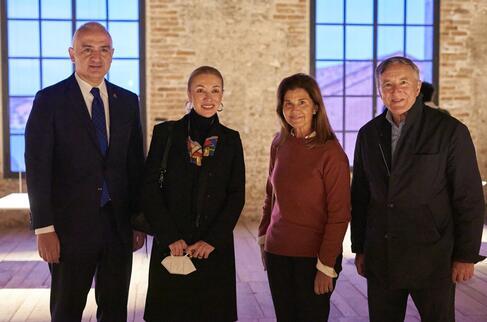 The Turkish Pavilion of the VENICE Biennale was inaugurated on Wednesday April 20, hosted by the Chairman of the Board of Directors of İKSV, Bülent Eczacıbaşı. A first was experienced during the opening, which took place with the participation of the Minister of Culture and Tourism Mehmet Nuri Ersoy. It is the first time that a Minister of Culture of the Republic of Turkey attends the opening of the pavilion which represents Turkey since 1991.

In a speech at the opening reception of the Turkey Pavilion, Minister Ersoy said: “The Venice Biennale plays a beautiful role in these days when the unifying power of culture and art is very important. . As the Ministry of Culture and Tourism, we will continue to increase our support for culture and art. It is very important that Turkey is represented here,” he said.
Bülent Eczacıbaşı, Chairman of İKSV Board, also thanked Culture and Tourism Minister Ersoy.
He said that the Turkey Pavilion at the Venice Biennale, which has been held under the coordination of İKSV since 2007, has made a significant contribution to promoting Turkey’s contemporary cultural and artistic production abroad. .
21 permanent supporters of the Turkish Pavilion space, 13 supporters who contributed to this year’s exhibition, İKSV tulip card members and many important names from the international art world and academia have attended the opening.

HE SENT CINGÖZ AND ZORBA FRONT
ARTIST Füsun Onur was unfortunately unable to attend the opening of his exhibition at the Venice Biennale. The 85-year-old artist, who said, “I sent Zorba and Cingöz first, maybe I’ll come in the next few months,” lost his older sister, İlhan Onur, shortly before the exhibition. Füsun Onur and his older sister İlhan Onur donated the Hayri Onur mansion in Kuzguncuk, where they were born and raised, to the Vehbi Koç Foundation.
It is planned that the mansion, witness to all the artistic production of the artist, will in the future be open to visitors as a house-museum and that its contents will host artist residency programs to be created by Arter . 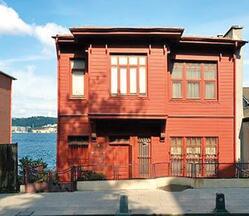 Füsun Onur, one of the pioneers of contemporary art in Turkey, studied sculpture at the Ali Hadi Bara studio of the Istanbul Academy of Fine Arts. Between 1964 and 1966, he pursued his master’s degree in sculpture at the Maryland Institute College of Art with a Fulbright scholarship. He opened his first personal exhibition at the Taksim Art Gallery in 1970, followed by the 7th Biennale of Young Artists in Paris (1971), the “Open Air Exhibitions” organized by the Istanbul Archeology Museums (1974, 1975, 1976, 1977) and the 13th Istanbul Biennale in Antwerp, Belgium. Participated in various exhibitions such as the Middelheim Biennale (1975).class=”medianet-inline-adv”>

600,000 visitors are expected
The 59th Venice Biennale International Art Exhibition, considered one of the most important art events of our time, is being held this year from April 23 to November 27, curated by Cecilia Alemani. In addition to the main exhibition entitled “The milk of dreams”, the biennale, which has been postponed to this year due to the pandemic, will host exhibitions from 81 countries, including the Turkish pavilion, at Arsenale, Giardini and different points from the city . Nearly 600,000 art lovers from all over the world are expected at the biennial.