Chocolatier Ferrero has recalled a batch of Kinder Surprise chocolates in the UK due to the danger of salmonella. In yesterday’s news, the UK Food Standards Agency (FSA) announced that chocolate company Ferrero was recalling certain batches of eggs as a precaution as investigations into the outbreak continue. So, is there a risk for Turkey? Are salmonella bacteria present in Kinder Surprise eggs in Turkey? Ferrero Chocolate Turkey has made a statement about this.

“WE ACT IN COOPERATION WITH LOCAL AUTHORITIES”

Ferrero Chocolate Turkey issued a written statement on the matter:

“No product imported and offered for sale by Ferrero Chocolate Turkey is affected by the above-mentioned situation. We are acting in cooperation with the local authorities in the ongoing quality processes regarding the possible link between Kinder Surprise products and the cases of Salmonella in some countries. Although none of the “Although there is no evidence that the Kinder product contains Salmonella, we take this issue very seriously, considering the health of consumers as our top priority. In this context, we are voluntarily recalling our products, which are manufactured in our Belgian factory and whose recommended use-by date is between July 11, 2022 and October 7, 2022.”

Stating that the products imported by Turkey were not concerned by the aforementioned situation, the company continued its explanations as follows:

Salmonella treatment is done by the doctor with appropriate antibiotics and supportive therapy.

HOW IS SALMONELLA TRANSMITTED?

– Human and animal wastes are not disposed of properly and their mixing with spring waters,

-It can be contaminated due to insufficient chlorination of drinking water and sanitary water.

– Foods such as meat, eggs, milk and dairy products carrying Salmonella and which are not well cooked,

– It can also be transmitted through raw vegetables and contaminated (dirty) fruits, spices and snacks.

Infection can occur if hygiene rules are not followed, especially after contact with reptiles such as snakes, turtles, lizards, frogs, birds and domestic animals such as chicks.

Bacteria can be transmitted from sick people to other people.

WHAT ARE THE SYMPTOMS OF SALMONELLA?

Approximately 12 to 72 hours after Salmonella bacteria are introduced into the body, symptoms of illness appear in the form of diarrhea, fever, nausea, vomiting and abdominal cramps. The illness usually lasts 4-7 days and most people recover without treatment. In some people, the diarrhea may be severe enough to require hospitalization. The disease is more severe in the elderly, infants, and people with weakened immune systems. 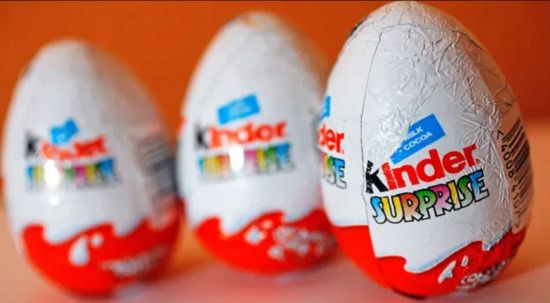 Families, beware: Kinder Surprise has hatched an epidemic! He’s been recalled, here’s why…
More than 60 children in the UK have had an outbreak of salmonella. The eggs are being recalled as the outbreak may be linked to Kinder Surprise eggs. On the other hand, chocolatier Ferrero recalled some Kinder Surprise chocolates that were not sold as a warning, and warned those who bought it not to consume it. If the treatment of Salmonella bacteria is not done well and the water and electrolyte balance is not achieved in time, the disease can be fatal.

Bacteria found in cheese after Kinder surprise egg
More than 60 children in England have had an outbreak of salmonella, and the eggs have been recalled because the outbreak may be linked to Kinder Surprise eggs. After the recall of surprise eggs, cheeses belonging to the Lactalis group in France were also recalled due to contamination with “Listeria bacteria”.