While on duty on Long Island in 2006, a small, dirty stray dog ​​found on the street was brought to the station.

“His hair was like felt, you couldn’t even brush it…and his teeth were bad, but he was still absolutely adorable and very grateful.”

At the end of work that day, Mendola told his colleagues that he would bring this white and brown dog home, there was no need for shelter.

“It’s the best thing I’ve ever done in my life,” said the 52-year-old officer.

The Shih Apso type dog loved children and playing. Mendola named her princess after the inspiration she got from Disney characters. 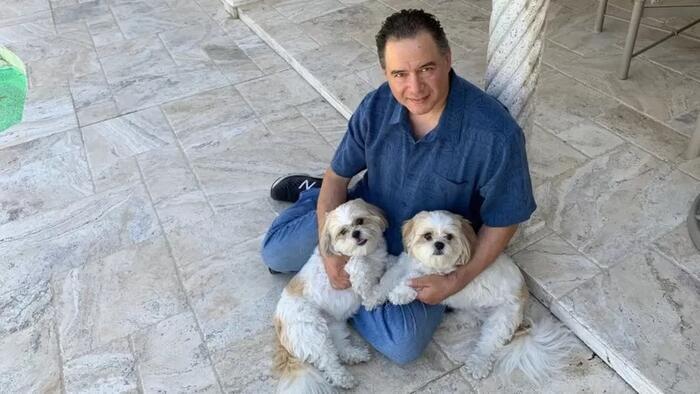 Ten years later, in 2016, when Princess was diagnosed with cancer, Mendola immediately called Viagen, a Texas-based company that was the first and only company to commercially clone dogs and cats in the United States.

Mendola says he knows the process from a South Korean documentary he watched. The country that cloned a dog for the first time in the world in 2005 is today a leader in this field.

She received a tissue sample from Viagen Princess before she died in 2017. A year later, two clone puppies were born to a surrogate female dog using this genetic material. The cubs were genetically identical to the princess.

Mendola named them Princess Ariel and Princess Jasmine, after the Disney characters.

“His spots, his hair, everything is pretty much the same, even his demeanor. You know how dogs sometimes get up and shake their whole body. They both do it at the same time, just like the princess did .”

Pet cloning is a controversial issue, but despite its high cost, its popularity is increasing day by day.

Viagen says they are cloning “more and more pets every year” and have made “hundreds” of clones since opening in 2015.

They charge $50,000 to clone a dog, $30,000 for a cat, and $85,000 for a horse. While this cost may be too high for most of us, many celebrities have announced that they have had their dogs cloned or are considering doing so in recent years.

World-famous singer Barbra Streisand announced in 2018 that she used Viagen to clone two puppies from her pet Samantha.

There are different cloning techniques, but in the most used method, a cell nucleus from the animal you want to clone is injected into a donor egg from which the genetic material has been taken.

The egg is transformed into an embryo in the laboratory environment. The embryo is then placed in the womb of a surrogate mother.

Viagen boss Blake Russell says the genetic material of the animal you want to clone can be stored almost indefinitely before the cloning process takes place. This happens by keeping the material at very low temperature or by cryopreservation.

He says the company takes care of the health of every dog ​​and cat it works on and that its work complies with all US laws.

However, animal-loving organizations have significant concerns about the industry. For example, some scientific studies suggest that cloned animals are more prone to disease.

Another point of criticism is that the success rate of the industry is not high. There are many clones that are not born fit and healthy. A 2018 report from Columbia University in New York shows that the average pass rate is just 20%.

According to animal health expert Penny Hawkins, the process can be painful and distressing for females whose eggs are donated and for pregnant surrogate mothers.

He also says that a cloned animal can never be an exact behavioral replica of the original animal. “There’s so much more to an animal than just DNA, and cloned animals will inevitably have different life experiences, giving them different personalities.”

Last year, a Viagen official said that 25% of an animal’s personality is formed by its upbringing or diet.

Dr Hawkins adds: “We recommend anyone looking for a new pet to join their family to adopt one of the thousands of animals seeking homes from shelters.”

It is also believed that the clone will trigger a crisis of the abandoned animal population.

Back on Long Island, Mendola says Princess Ariel and Princess Jasmine are healthy and happy.

Mendola, who adopted another dog named Bebe before the original princess died, adds that the twins got on well with her.

And when Bebe died unexpectedly this year, Mendola had already saved her genetic material for a future clone.