During the session of the assembly, the issue of updating the price tariffs for transactions in certain directions came to the agenda. The proposal to set the revaluation rate for 2022 at 36.20%, taking into account expected inflation and current increases, has come on the agenda of parliament. While relevant proposals presented to members of the assembly sparked discussion in the assembly, all items were unanimously referred to the relevant committees.

The departments concerned are as follows;

– During the preparation of the 2022 budget of the Building Control Department, the fees for the works and transactions carried out by the management are based on current and forecast inflation forecasts,

– During the preparation of the 2022 budget of the Parks and Gardens Department, the fees for the works and transactions carried out by the management are based on current and forecast inflation forecasts,

– When preparing the 2022 budget for the Department of Culture and Social Affairs, royalties for works and transactions carried out by the department are based on current and forecast inflation forecasts,

AKTAŞ: HOW DID YOU BORROW 150 MILLION FROM THE MUNICIPALITY WITHOUT DOING ANYTHING?
Abdullah Aktaş, Deputy Chairman of the AK Party Group, who spoke in the speeches off the agenda, used the following expressions when reacting to the advertisements:

Two councils are on the agenda. I think we have no other direction left for a 36.20% increase. You know, we’ve been arguing for a long time, we’ve seen it on billboards, it’s been shared on social media accounts as well. Advertisements were made indicating that 251 million 520 thousand debts had been paid. We also asked for information on this in the previous legislature, and the results came in. When we look here, at the end of the 2018 elections, that is, depending on the day Mr. Sandal took office, he displayed an attitude as if he had “taken over a bankrupt commune” and repaid the debt since his arrival. However, most of the things that all the service units of the municipality collected were collected in the previous period. In 2019, Mr. Serdar debited the municipality of 150 million since the day of his arrival, without making the slightest investment. While the municipal debt was 172 million in 2018, it increased to 209 million TL at the end of 2019. About 50 million borrowed. At the end of 2020, our estimate is that the municipal debt is 240 million TL. There was a decrease due to land donated to tax offices and it fell to 176 million at the end of 2021. According to the last day of last year, the municipal debt is 285 million TL. 251 million have also been reimbursed. When it was taken over, the municipality did not have as many debts. So you didn’t pay the debt, you borrowed it. We are not against borrowing. However, you could not keep any of the 24 promises made to the citizens. How did you borrow 150 million from the municipality without doing anything?

TOPTAŞ: WE ARE A MUNICIPALITY WITHOUT MARKET OBLIGATIONS
Responding to the allegations of AK party member Aktaş, CHP MP Mehmet Toptaş said that the budget of Bayraklı Municipality is quite good and used the following statements:

This is where the 36.20% increase comes from. When developing the budget last year, we estimated that there would be an inflation of 18%, but our government also made a revaluation of 36.20%. We’ll make it a clue. No one should consider this as a separate increase. We will complete the amount we have budgeted, there will be no additional increase. We are in a situation where we have no debt with the banks. We are a municipality that has no debt to the market. We have units that work well. There is no deficit in our budget. No one should compare us to other municipalities. Bayraklı Municipality is perhaps among the top 5 municipalities financially in Izmir.” 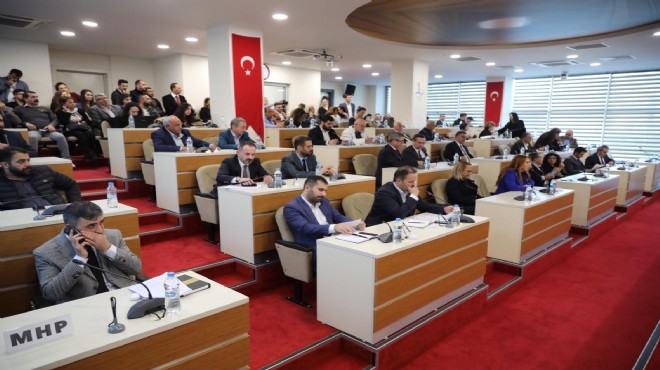 ŞAHİN: NOTHING DONE
Speaking from the ranks of the MHP, Muhammet Şahin highlighted the problems with the roads and said:

“Of course the municipality has debts, there is no problem. However, the problem here is the municipality’s debt, but there is no work they are doing. Not even one of the problems he promised during the election period when our president was elected has not yet come true. Let’s get out of here, Cengizhan, the roads to Alparslan districts are terrible. With our own car. “We Let’s do some math to see where our tire will burst when we go. There are no projects done in exchange for debts. There are photographs in the booklet, but they are only photographs. You say Koskoca Bayraklı, you say the heart of Izmir, but there is no room. Nothing is done. It only exists in the virtual situation.

KESKİN: OUR SOCIAL MUNICIPALITY SITUATION HAS STARTED
Responding to criticism, CHP Assembly Member Serap Keskin said: “When we took over the municipality in 2019 the dollar was 5.26, now it is around 16. Economic conditions, pandemic, earthquake of land, she needed to make plans in our current situation. Today, our social municipality is preliminary: “We also want to invest, but the priorities change a lot in the economic conditions. I suggest that you take stock taking into account these economic conditions,” he said.

POLAT: THE METROPOLITAN MUNICIPALITY MAKES INVESTMENTS
CHP Group Vice President Cindi Can Polat said it was not very fair to wait for investments: “There is a very serious economic crisis all over the world. Turkey is also affected by it. Bayraklı Municipality in Izmir is also affected is a black image all over the world Our president promises when he is a candidate There is a rabbit out of the hat in Bayraklı in an environment where all public institutions and organizations stop their investments and do not make new investments. Bayraklı Municipality also “It is not right to expect investments from the district municipalities. The metropolitan municipality is making the investments,” he said.

ÖNAL: THE METROPOLITAN MUNICIPALITY IS MAKING INVESTMENTS…
Vice President İrfan Önal finally took the floor, responding to all the criticisms and allegations, and said that investments had been made and said, “Our president is giving information about the election period in parliament. We may be late, but Bayraklı experiences are not simple things. . Tens of hundreds of our President’s promises have come true. The situation on the billboards regarding the payment of money speaks the truth. There is nothing here that is meant to deceive you or anyone else. You know where the 250 million paid debt was, and we know it too. The investment could be increased by making debts, but it is at the discretion of the president. 20-30% “We preferred to pay our debts to the banks instead of paying the interest. 60% of our population is in the neighborhoods affected by the earthquake. Aren’t the investments made here counted as victims of the earthquake? earthquake? So many services have been provided for those who want to see them… Most of the debts have been paid. Most of the debts are public,” he said.