For some reason, it’s nearly impossible to get a decent picture of some dogs, according to information from WebTekno. You try again and again and take thousands of photos; but most photos are either out of focus, or your dog hasn’t looked at the camera, or he’s busy licking or scratching – so he’s done everything but behave and pose for the camera, and you just couldn’t capture the photo you so desperately want. Whether it’s a phone or a camera, that result still doesn’t change; Even the best-behaved dogs won’t pose for the camera. Even if you’re not shooting with a flash, they’ll turn their heads as soon as the camera pops up, like it’s instinct.

You too failed to take a nice photo of your beautiful friend and you kept saying “Why? If you are wondering, this article may be of interest to you.

Why do dogs hate cameras?

Dogs use body language a lot more than you think. Because they can’t communicate like humans, the vast majority of dog communication consists of non-verbal cues. We humans also frequently use body language; however, sometimes we cannot predict how our body language will be understood by others, and our loyal friends may perceive a gesture that we consider affectionate in a very different way. For example, staring at your dog for a long time without looking away can make him very nervous. Plus, your dog doesn’t have to run away to tell you he’s scared or nervous; Even simple gestures like yawning, licking their mouth, and turning their head away can mean they’re not comfortable with something. 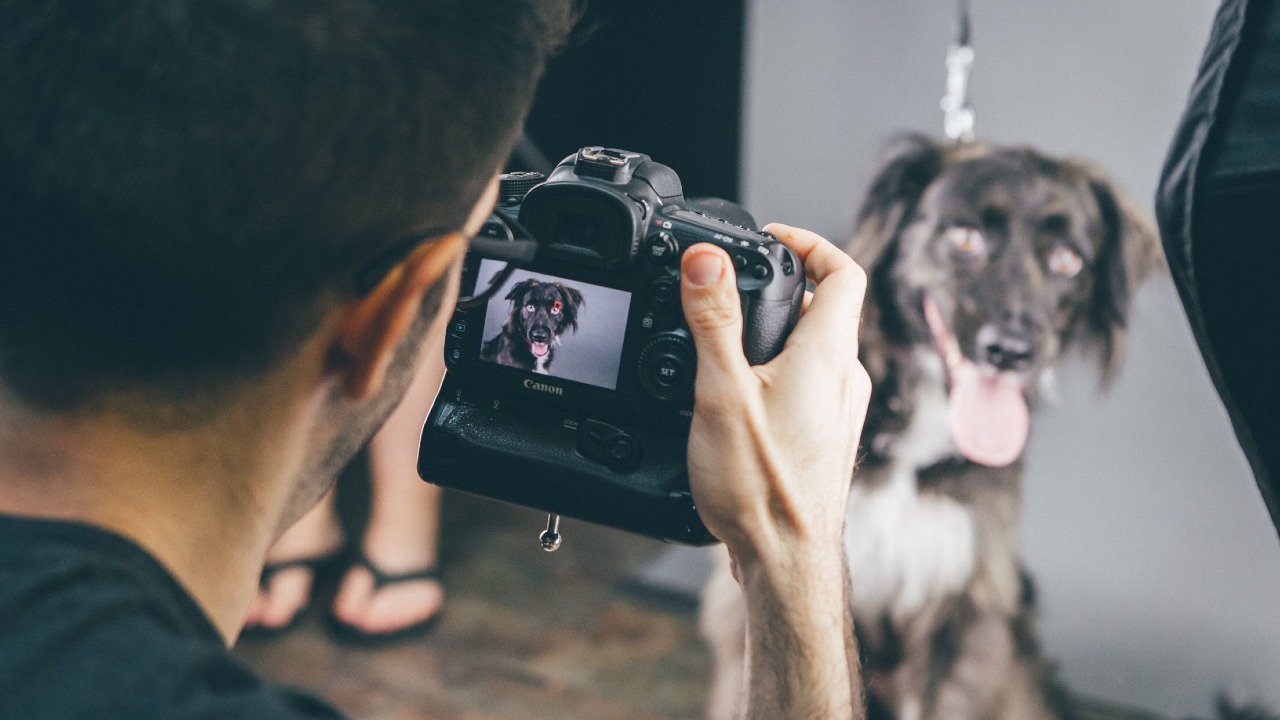 Dogs display these behaviors, which Turid Rugass, a Norwegian dog specialist, describes as “calming signals”, when faced with a situation where they are not comfortable, and this is their way to say, “I’m not at all comfortable at the moment, please help me”. You may have witnessed some of these signals when you hug your dog or see someone else hugging a dog; because although we generally think otherwise, dogs don’t really like to be cuddled.

By cuddling, you are not only violating their personal space, but you are also giving your dog superiority in their eyes. A dog laying its paw on another dog is a sign of superiority; Therefore, while you think you are showing love, this behavior is perceived by your dog as an effort to establish dominance. Most dogs can handle being hugged; however, if there is no bond between the dog and the person hugging him, the dog may feel threatened, become defensive, and react aggressively to this behavior. It might be worth keeping this in mind the next time you try to take a selfie with dogs. 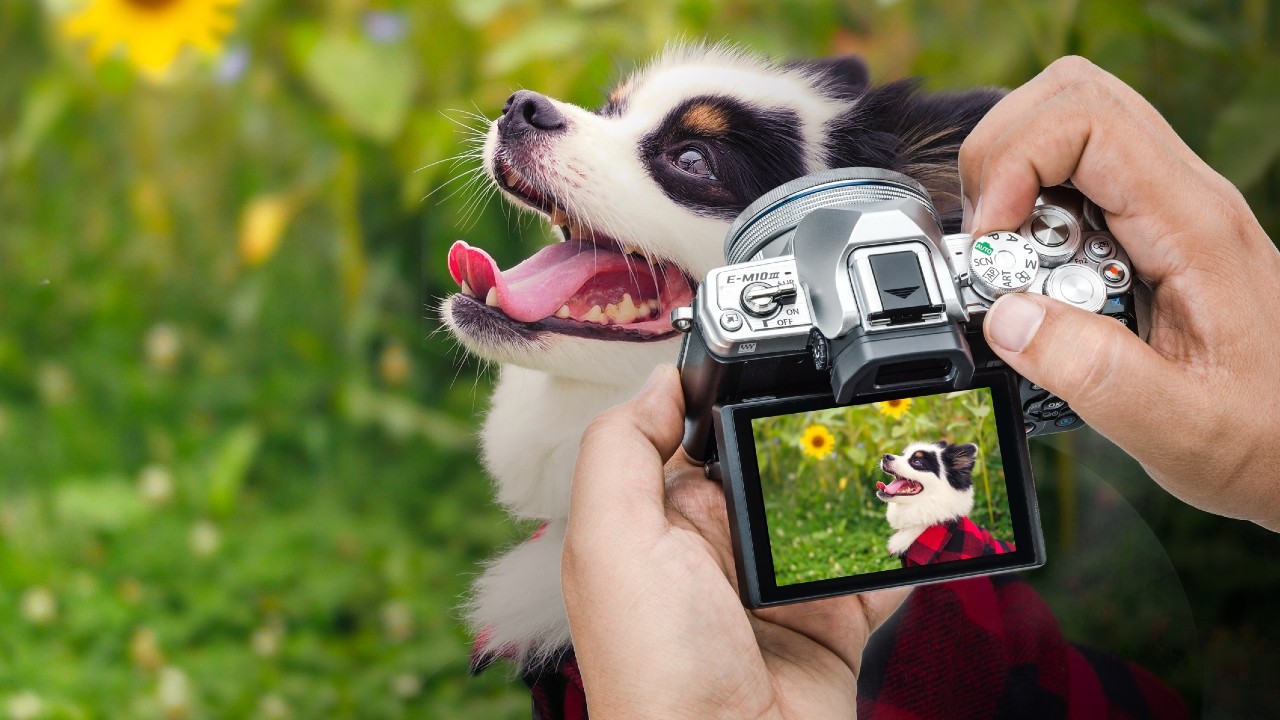 Although it may seem like an innocent act to us, photographing your dog can be an extremely tense experience for him. Not only are cameras strange devices that are quite alien to dogs and difficult to grasp, but they also make noises too loud for us to hear when taking a picture or zooming; however, perceiving these sounds is extremely easy for dogs whose senses are much more developed than ours. Especially if you turn on a flash, you are very likely to scare your dog away; Even us humans are sometimes surprised at what we see when we take a photo with a flash.

So what can we do? 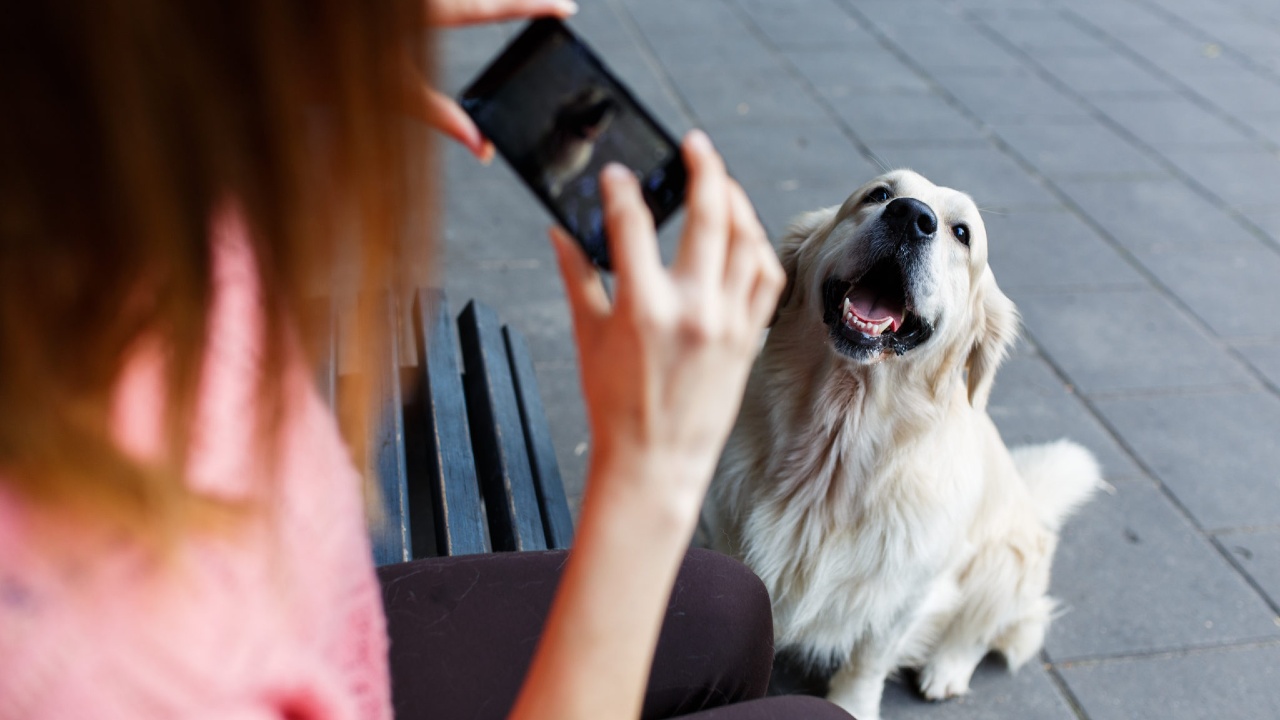 Even if you say, “I’m definitely going to take this picture,” there are a few things you can do to make this process less stressful for your lovely friend.

Introduce your dog to the camera as a puppy 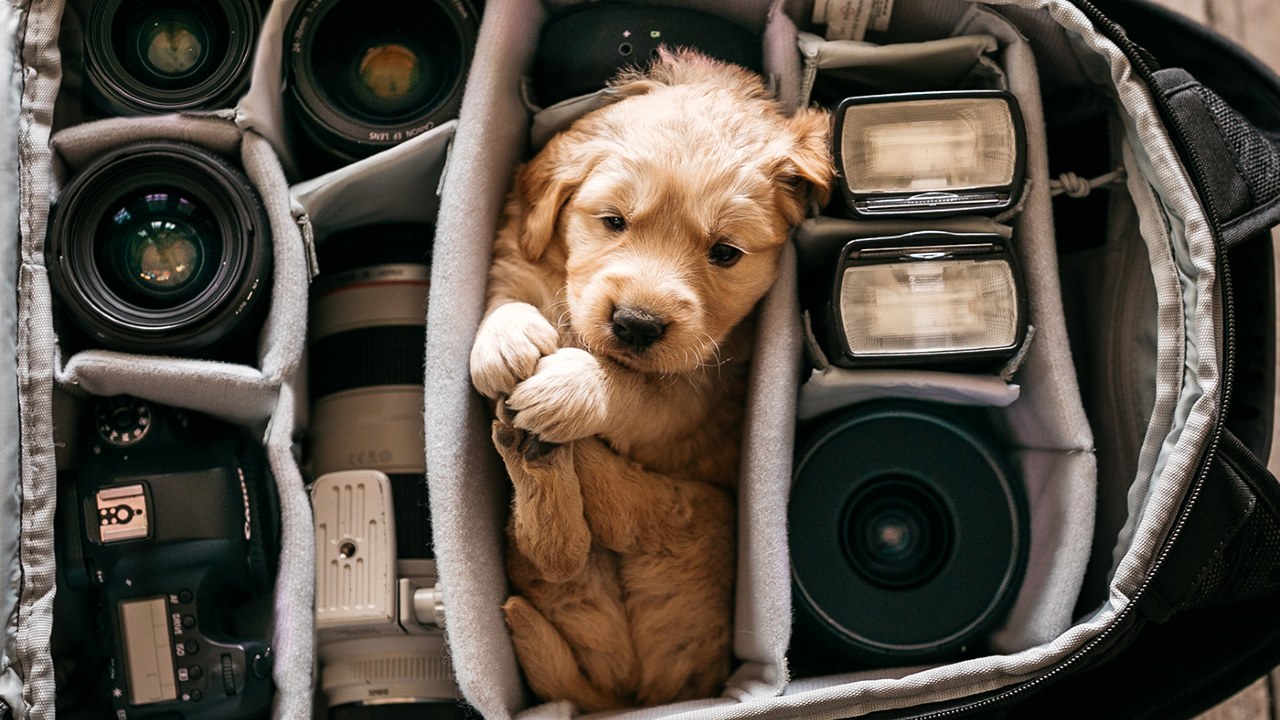 Dogs don’t have to worry about looking good for the camera – they’re extremely cute just the way they are. Their only concern is to feel comfortable around you and in the work you do together. Introducing your dog to the camera as a puppy can get him used to taking pictures over time.

Let your dog peek at the camera 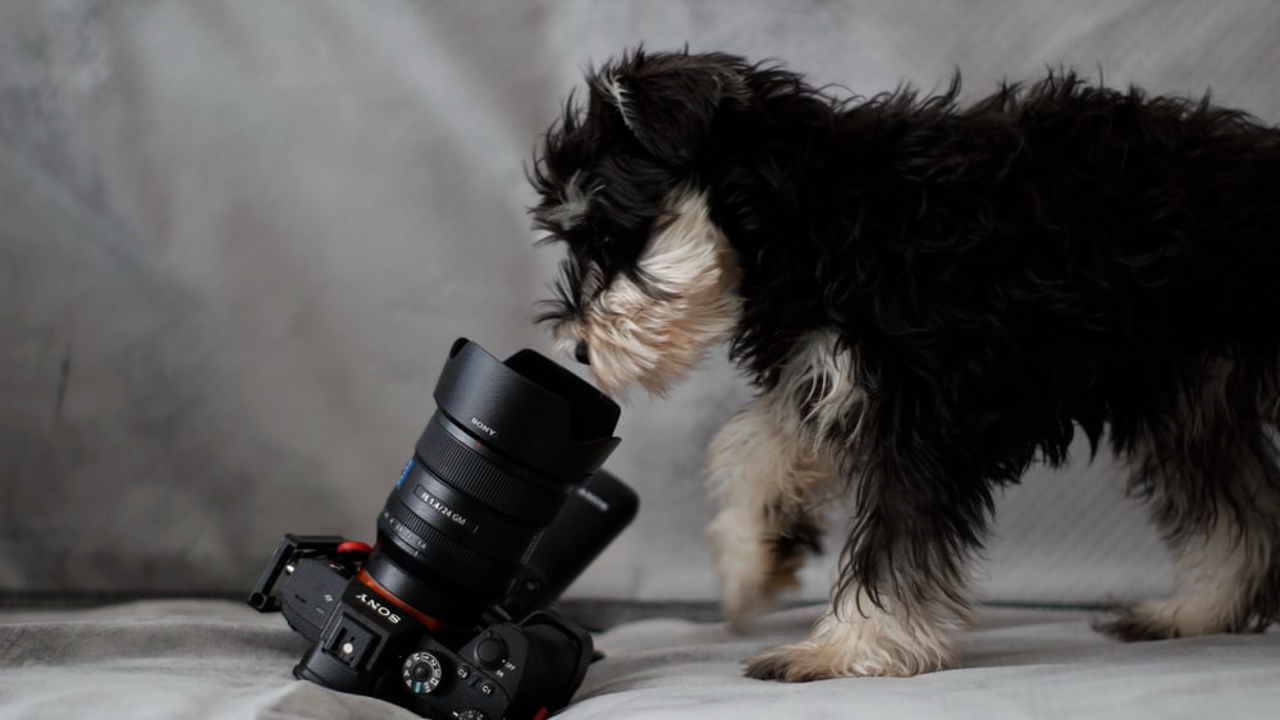 Do not use flash 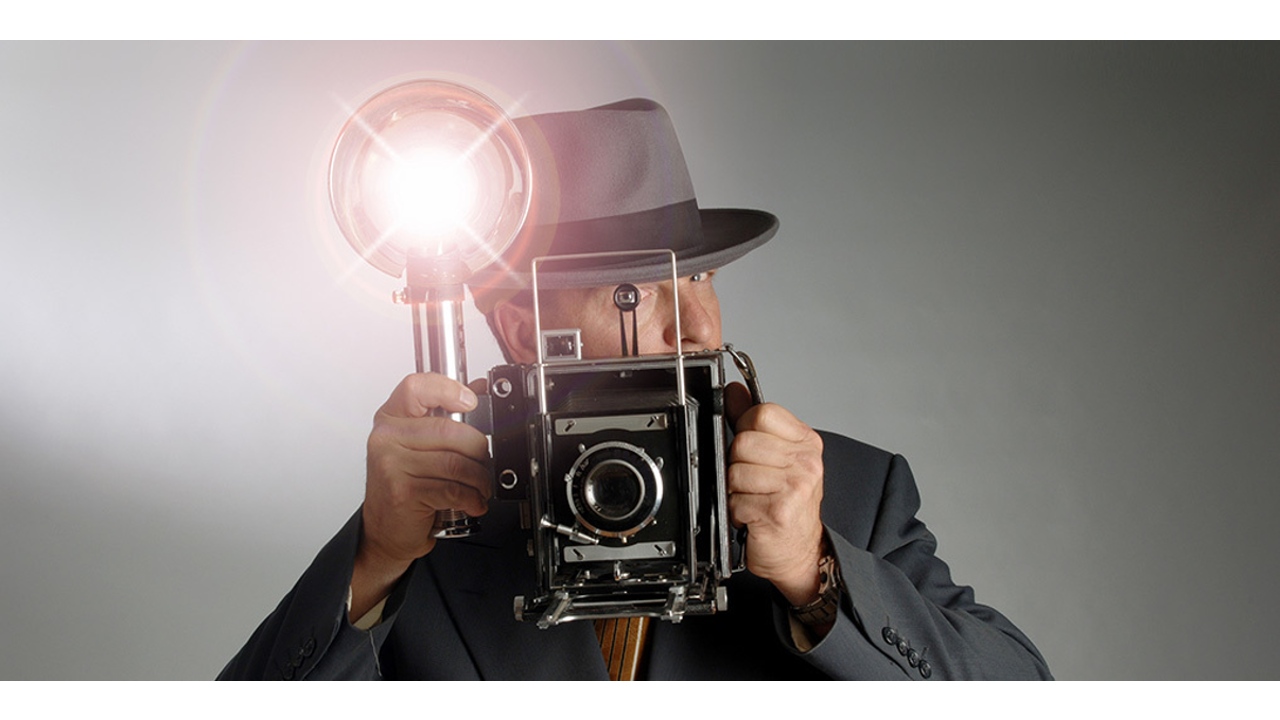 Avoid using flash. As we said before, while the flash can stun even us humans, imagine the effect it can have on our canine friends, whose vision is much more developed than ours. Even if you have to use the flash, if you hold the flash to a few objects in the environment and then reward your dog, your dog will not be harmed by the flash over time; on the contrary, he will realize that he will be rewarded later. 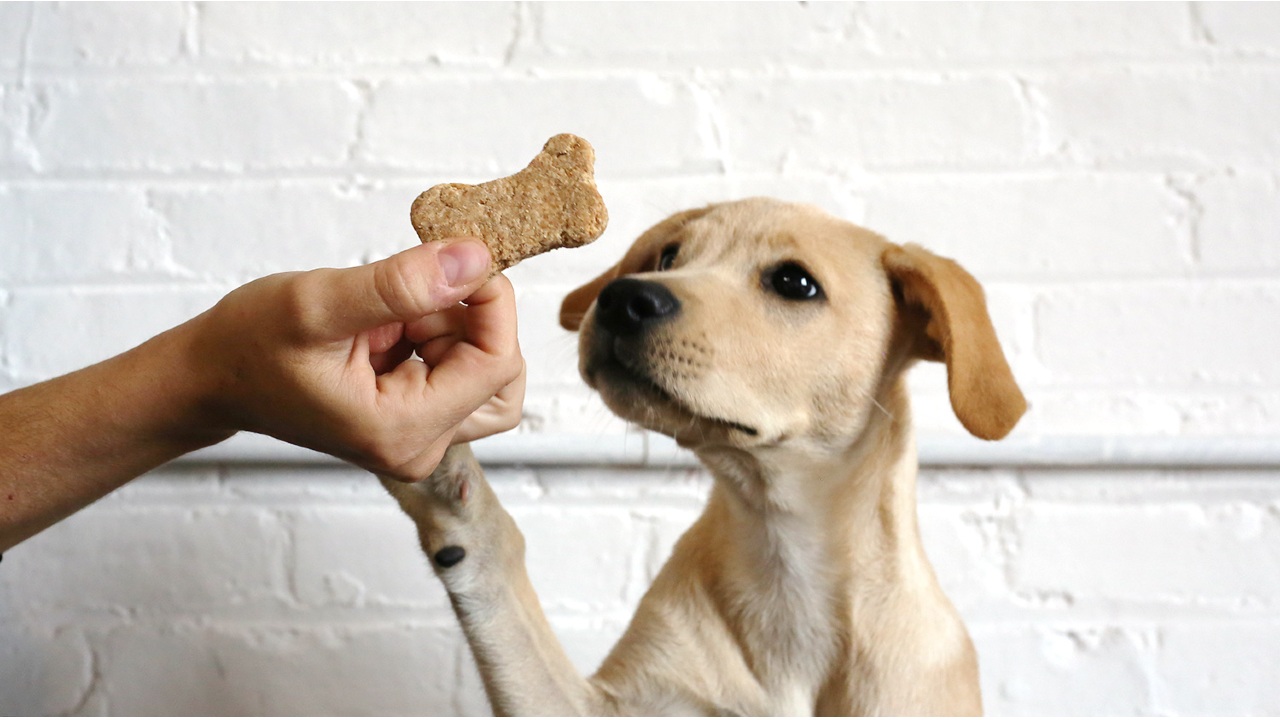 Rewarding your dog to stay still and latch onto the camera can, over time, help your dog associate the shot with the reward, which means the process is much more stress-free and painless. 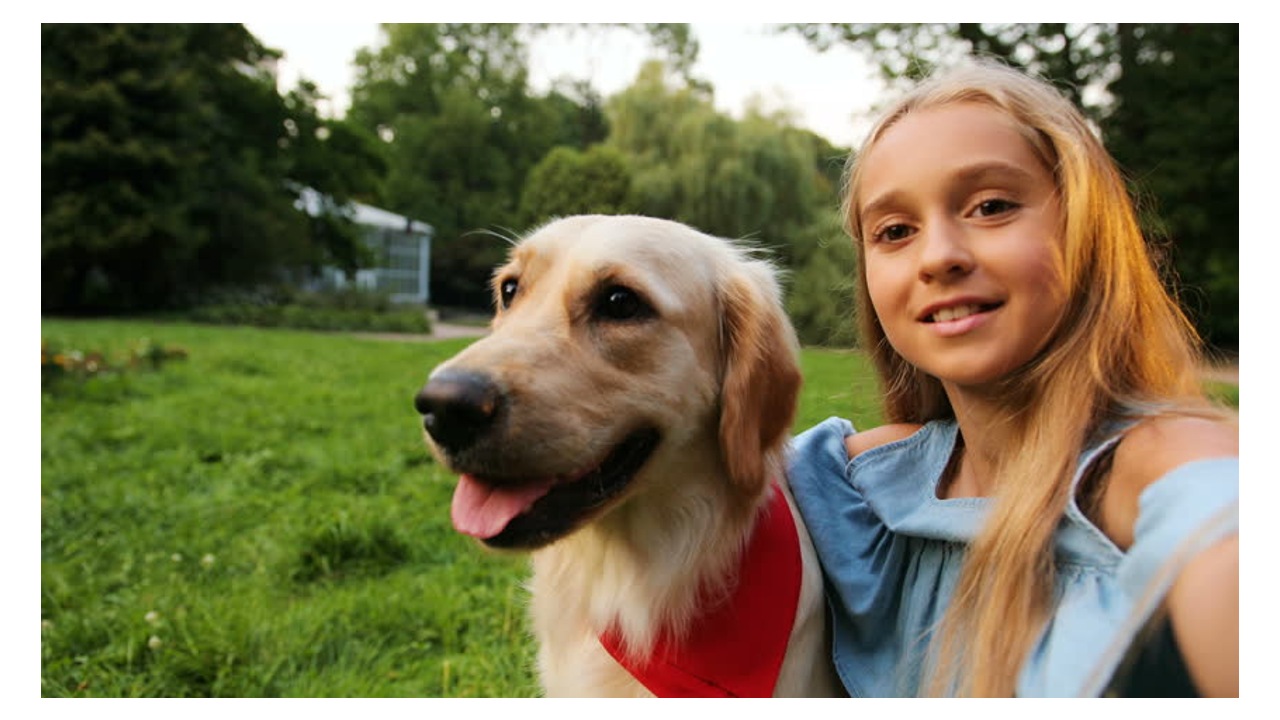 Dogs are extremely warm-blooded animals and they can come and throw themselves in your lap and ask for love no matter what is on your mind right now. They don’t seem to have much respect for your personal space; but at this point you must not forget that you are a human and he is a dog. If your dog isn’t feeling comfortable right now, respect his personal space, and if he’s exhibiting nervous behavior, take a break and help him relax if necessary.

Pay attention to your tone of voice and body language 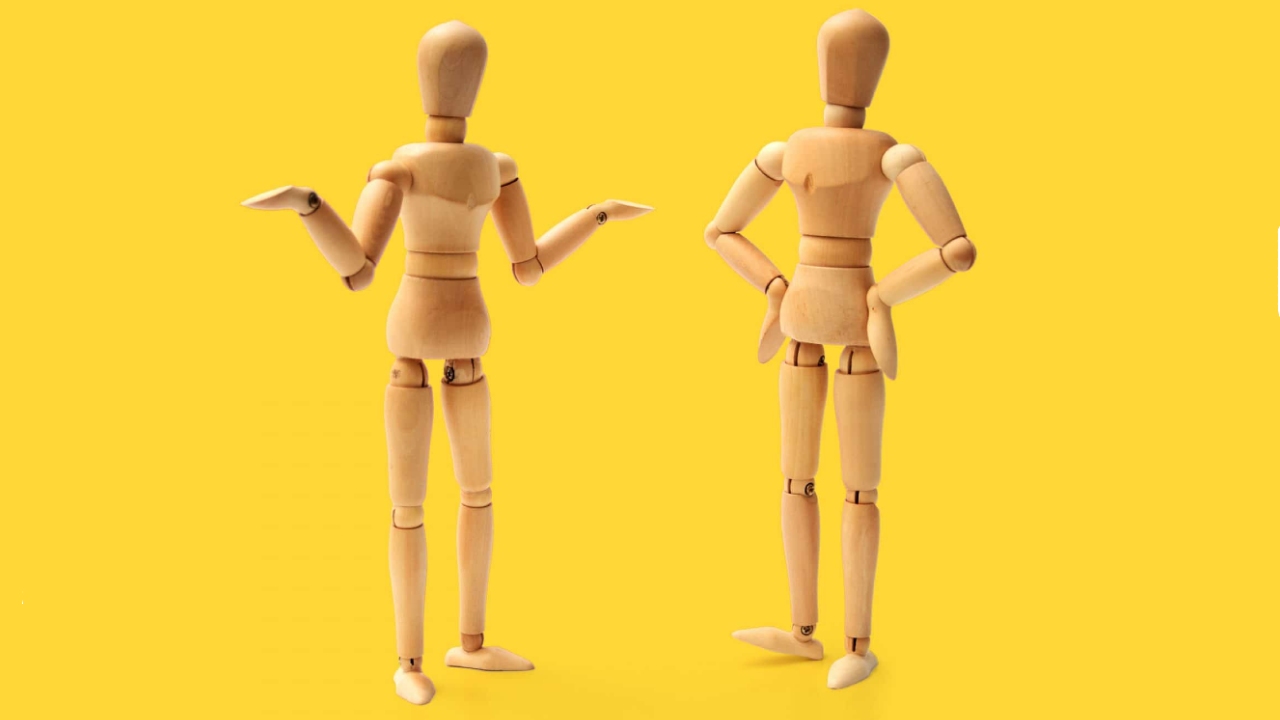 The tone and body language you use when training your dog for the photo shoot is also extremely important. Dogs are very sensitive to different types of body language. If you are nervous and uncomfortable, it will also affect them. If you use calm and cheerful body language, it will also help them relax. Therefore, using a higher pitch and calming body language during training will also prevent your dog from becoming stressed, showing that there is nothing wrong. 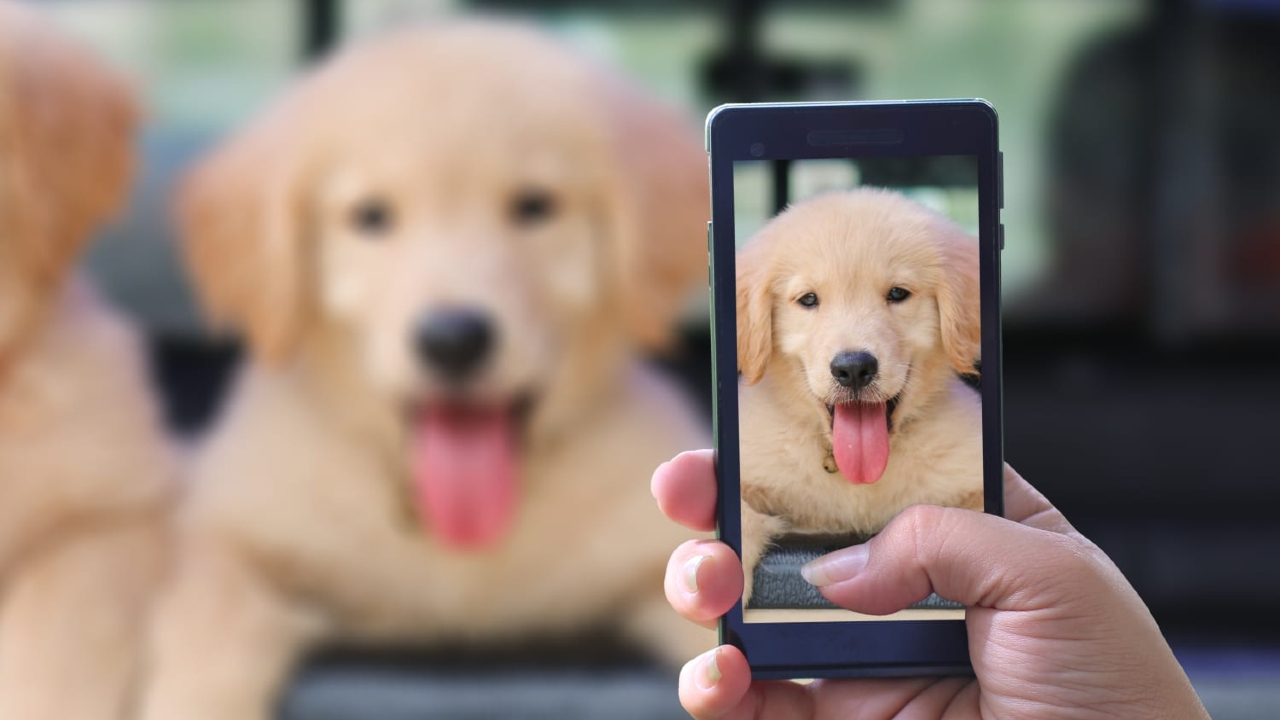 Some dogs, especially those used to being photographed regularly from a young age, don’t care too much about the camera. The fact that they have been involved with the camera since their childhood has a lot to do with it; however, this does not mean that they will enjoy being photographed every second, as they do with humans. If you are in an environment that is unfamiliar to your dog, you will also help tension your already nervous dog by taking a picture of him. Instead of a camera to take pictures, it may be better to use a phone that your dog is probably more familiar with in everyday life.

Dogs aren’t the only friends who fear the camera 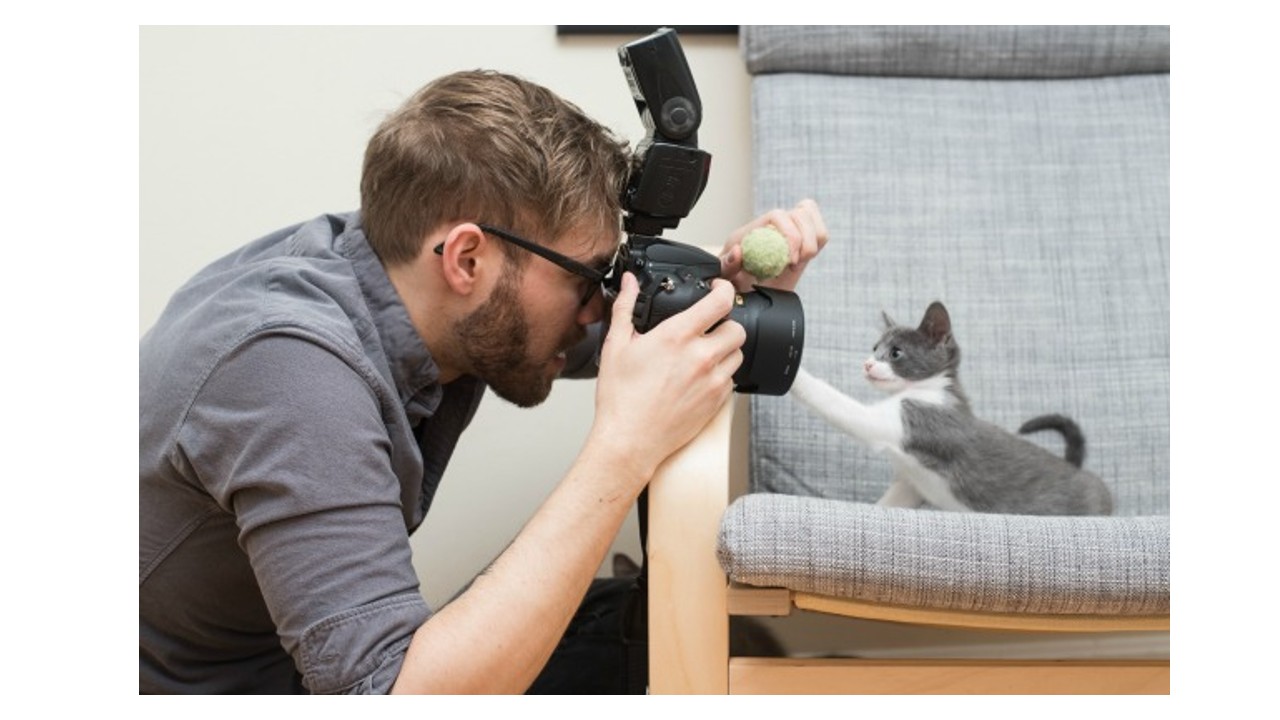 Although our article discusses dog fear of the camera, some of our feline friends may exhibit this behavior as well. No creature likes having cameras 24/7, and using a flash can stun cats and dogs alike. In such cases, you can lure your dog or cat with a toy or treat to take the shot you want; however, make sure to play games and hang out with them because they are a good boy and have your picture taken afterwards, that will be the best reward. 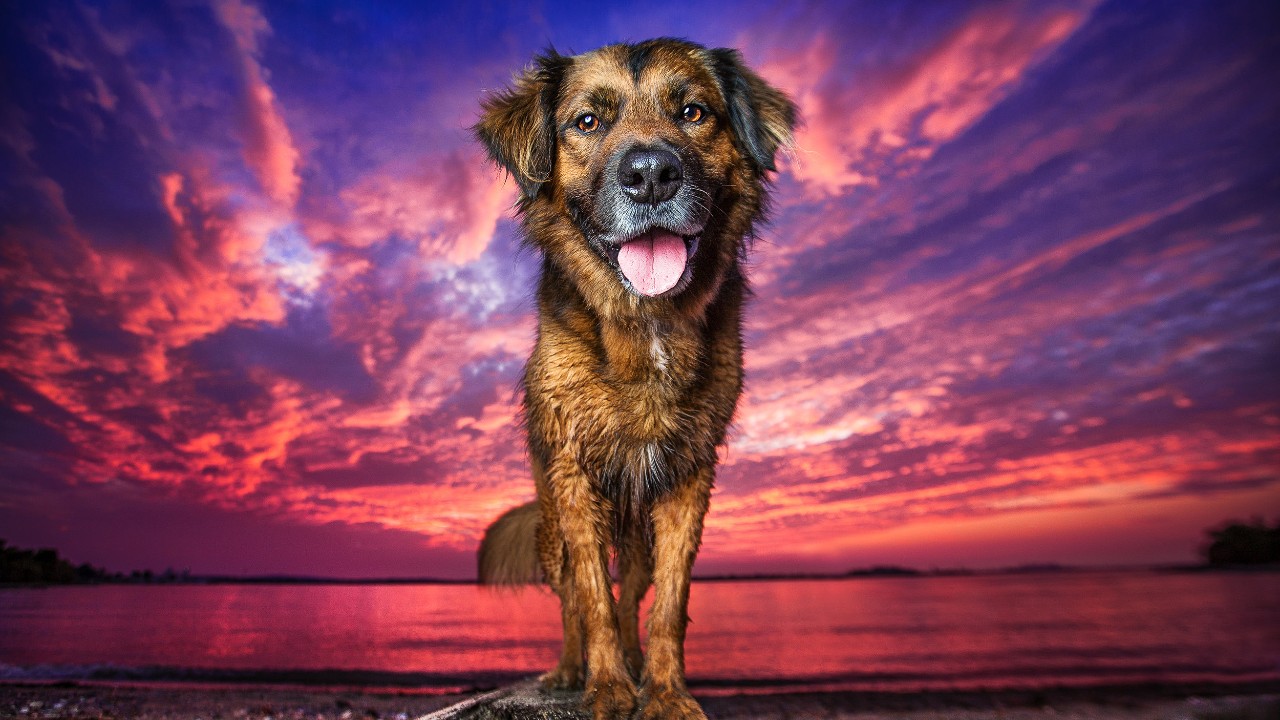 So even though some dogs are born to be in the spotlight, that doesn’t mean all dogs will be; some dogs can be extremely shy in front of the camera. If so, your responsibility is to pay attention to your dog’s body language; This way you can better distinguish when you should take pictures and when you shouldn’t. And the most important thing you should never forget is that you shouldn’t do anything to another creature that you wouldn’t want to be inflicted on you.