We’ve been creating strange creatures in our minds for thousands of years. We place them in our mythology. Almost all of them are of oriental origin.

Vishnu on the back of his mount Garuda.

We laugh at Hollywood blockbuster movies because they’re full of bogeymen, monsters, wizards. It seems absurd sometimes, because they don’t have a deep history, we argue that they invented and filmed hot creatures to make money, in our not too deep conversations (which we didn’t did not seek to deepen)! However, almost all unreal and supernatural creatures created by the human mind are of oriental origin. It’s not Europe, it’s straight east! Near East, Middle East, Mesopotamia, Egypt, India, China. The vast geography starting in Anatolia and stretching east to the ocean (we can even say the strip between roughly 20-40 degrees north latitude) is the most fervent bench of production in our imaginary, including a little to the north and a little to the south. The Hellenic civilization, which we call Greek of Persian influence, is later included in this band. What I mean is that those who think of Zeus or Aphrodite when talking about mythology are still under the influence of outdated and outdated Western historians. When the tales of Zeus first began to be told, godfathers of the lightning-handed god roamed the geography we’ve been talking about for thousands of years!

There are many strange creatures. Call it mythology or literature, it’s a figment of the human imagination anyway, teeming with strange creatures. Of course, we are talking about uncreated creatures. For example, you may have heard of the goat-footed and horned Pan. He is one of the important figures in Hellenic mythology. He is the god of flocks and shepherds in the Greek pantheon. In Pan, the goat not only has horns and legs, but also a tail. This strange creature is also the origin of the word “panic” in mythological tales that have passed from Greece to Rome. This is explained differently in some “Panic” ceremonies/rituals, which means escape from Pan, but the truth is much simpler. Pan is a shepherd and says “shit! to the goats. and the poor beasts flee en masse, without knowing where or why. This is “panic”. Pan is also associated with “exaggerated sexual appetite”, and people’s evasion of Pan during ceremonies is interpreted as “Oh, let’s not get wet either”. (Of course, between us, in some ceremonies, some women were mostly grabbed by Pan because ceremonies were free from moral judgments in those days.) And yet, no one knows why a “goat-like shepherd” is associated with sexuality. .
It’s related because this eccentric friend with horns and playing his reed flute actually hails from the East, like many other weird mythological creatures. Ancient Egypt has a strange creature called Min and is the origin of Pan. (Or at least that’s what we think.) Min has always been depicted with an exaggerated organ in pictures, because she has enormous sexual power. Two very long feathers found on Min’s head in Egypt were also transformed into horns in Greek. These are not details we need to dwell on too much at this time. Our subject is strange creatures and let’s get to that.

I told you, when you think of mythology, most people think of Greek stories. Let’s say Egypt comes, India comes… Islam doesn’t come to mind to a great extent, but it comes to mind. However, there is a very serious and rather thick (i.e. dense) corpus called Islamic mythology. Because – as we always say – the stories told before the emergence of any religion do not disappear after the emergence of religion, they are only suitable for religion.
See, for example, there is a mythological creature named “Esbar”. In other words, strange creature. His head is a horse, his body is human. This creature, which lives on the islands of the China Sea, has two wings. The creature named “Kirşsâr” is a mixture of human and bear, it speaks but what it says is incomprehensible. He talks like a bear. “Dû Peyker” has two heads, four arms and four legs. Similar to the gods of Indian mythology. The face of another named “Etem” is a pig, but the rest is human. A creature called “Jewish sheikh”, that is, “old Jew”, lives in the western ocean, has a human face, but has a frog-like body. He has a long white beard and is named a Jew because he only lands on Saturday, as the Jewish holiday (Sabbath) is Saturday, after staying ashore until Sunday morning he returns to the water. 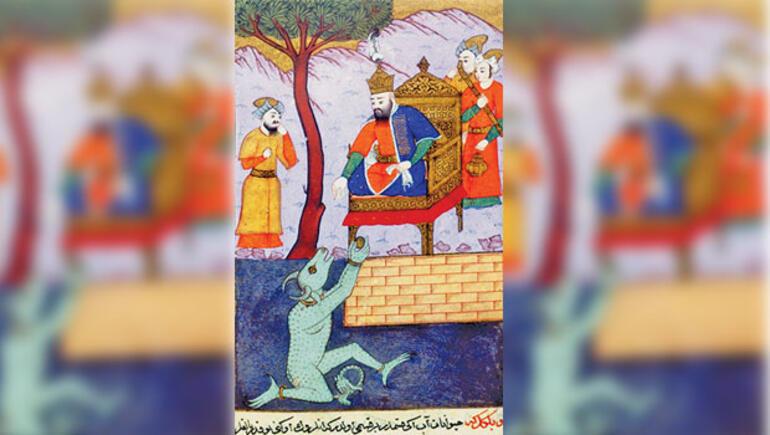 We even see dog-headed creatures on the Piri Reis map. We had a long conversation about the creature named “Shah-i Maran (Shahmaran)” before, you may remember. For those interested, there are several posts on the subject in the July 2020 archive. Shahmaran is a huge snake, but he talks, he has magical sides, etc. He is a very important mythological character and he is still part of our lives today. There are many representations of it at home.
Let’s not prolong this discussion too much. Acaibü’l Mahlukat by Kazvinî is ideal for those who want to see more details on the subject. It will be difficult to find this book, but it is possible to see parts of it on the Internet and in the Encyclopedia of Islam. Those who want to benefit from more detailed and exquisite work in Turkish can obtain the great work of Metin And’s Ottoman-Islamic Mythology with Miniatures (Yapı Kredi Publications), which I also greatly benefit from. 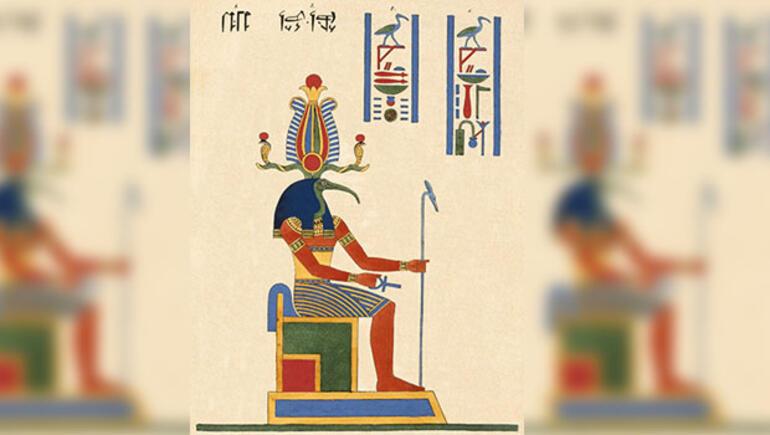 Back to Egypt. This place is full of strange creatures, of course. For example, there is Anubis. Jackal-headed person. According to mythology, he was the fourth son of the sun god Ra. But later, it was believed that he was the son of Osiris. It is written in the sources that he was the initiator of the art of the mummy. He is called the “master of mummies packing”. Yet another child of Ra, one of his daughters, Bastet, protects mankind from disease and evil spirits. A cat-headed person. The cat is one of the most important animals in Egypt. The god named Thoth, who is considered the lord of wisdom and writing, is also depicted in the form of a bald human. But it is interesting to note that he sometimes has a monkey’s head. But if you see a bald person in Egyptian paintings, know that it is Thoth.
Let’s go from Egypt to India. There is a very friendly elephant-headed god: Ganesha. His head is that of an elephant, his body is human. He is also the god of wisdom and literature in Indian mythology. (The emphasis may be on the memory of elephants, or maybe it’s because elephants act really cautiously in nature.) Also in India, Garuda, the saddle animal of Vishnu, the guardian god of the universe, whose main function is to ensure that good overcomes evil, is depicted as half-man, half-eagle. Vishnu already has four arms!

There is more. We can go all the way to China and back to Anatolia, and we find many strange creatures like these in mythological accounts. The head of an animal and the body of a thousand people or the head of a human but the body of an animal are often combined in these accounts. Everyone’s sacredness is precious, we cannot disrespect it just because it seems ridiculous to us. Because these fabulous animals, these strange creatures have existed in the human mind for thousands, perhaps tens of thousands of years… But the truth is that these creatures only live in our imagination and have thus entered the literature and the texts. All of them have many characteristics, but their main common characteristic is that they have never harmed a single human hair. Because they are already gone. Who can harm a creature that does not exist? Maybe sometimes the cunning people who act on their behalf and claim to take orders from them may have harmed other people, but it’s not the fault of these strange creatures if they harm others people in accordance with the orders they receive from creatures created by their imaginations, again only with their imaginations. It’s all man’s fault, man’s brutality.

AIR AND SEA THIS WEEKEND

With southerly winds, it may be a bit warm today and tomorrow, but as the weather returns to full consistency, it looks like the weather turning northerly on Sunday will bring with it further cold and rainy weather. . We might even see some snowfall in the new week. In other words, these are the times when the seagull will make us look through the door and burn tools that we don’t use in city life, like pickaxes and shovels. And I hope that’s the last time you’re cold. Because times have become such that we are counting the days as a nation to get rid of the swell of bills it causes, rather than the cold. Stay well.